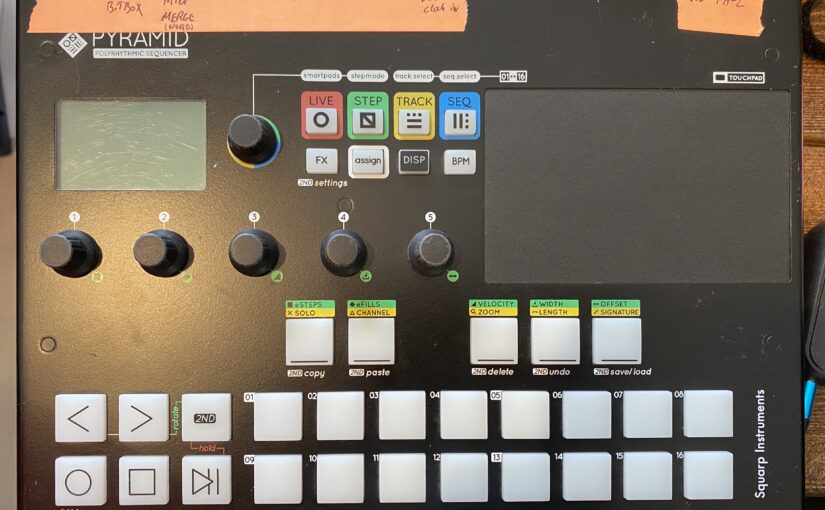 I think its the ON switch of my power-distribution rack… It’s distributing the power to my whole studio, eurorack gear, outboard, speakers, and keyboards. When I switch that on, the air in the studio is ripe with possibility and promise. Sometimes, all the options are too much and I dive into crazy module-housekeeping, firmware updating, or somehow just bounce icons around on my computer desktop, and after a few hours, I have to switch off the system with nothing to show for it. Other times, I’ve managed to explore sonic avenues and great musical adventures – which, mostly, I just keep to myself and stash away on some hard drive…

What would you change?I know it is a boring answer – but it’s my laptop… (which is also, funny enough, maybe the most horrible piece of kit). It’s the central control hub in my studio – and it would be immensely more challenging to record, learn about, integrate all the other stuff in the studio without it. I grew up in “the dark ages” and spend an awful amount of time on tape decks, 4-tracks, etc. – and had to save up to go to a studio to record something, often at bad hours and under strict time constraints. The laptop solves all that. On the other hand, though, it removes a lot of the more tangible and analog parts of music-making; it always needs some update and seems to get slow and chunky after just a few years. And it’s a constant fight to keep it from distracting you from where you wanna go… (Yeah, so, with great power comes great responsibility – and the problem with computers, is they take no responsibility – you have to do that yourself ;o) ). If I could change anything, I think it ought to be much easier (or in Apple’s case, simply **possible**) to update processors, memory, and disk drives on laptops.

I’ve brought my OP-1 and Deluge a couple of times – both devices really great all-round sound and composition machines. I’ve recently traded my Deluge for an AKAI Force though, because I kept forgetting and had to relearn the interface for the Deluge. Also, I always bring some small recording gear (recently a Zoom HN6 or at least good external smartphone microphone like the SHURE MV88) traveling or commuting. If nothing else, I always bring home some “ambient” field recordings if I’ve been traveling to new places. Often, recordings like that, seem to come in handy…

I would love for the ORCA live-coding environment to be available in a eurorack module. It’s running on the Monome NORNS, which is pretty close, but to me, it seems a eurorack version would be perfect. The other way around; I use simple Max for Live LFO’s a lot to map out to different parameters in Ableton. It would be great to have a Mutable Instruments “Marbles” available in Ableton also…

Back in the day – maybe mid 90’ies – I bought a German soundcard (i forget the name) for my windows-based rig. It was pretty expensive for me at the time – and I think I spend years getting it to work properly and wasted a lot of precious time and creative energy on it. So, I think I mostly regret NOT selling enough gear…

It might be my Squarp Pyramid sequencer and Eurorack combination. It’s limited enough, that I don’t get overwhelmed by choices like sometimes in computer-based DAW’s – but it’s also advanced enough to inspire and get deep into.

I would switch to Mac WAY sooner.

I’m diving into different live-coding environments – mostly for straight fun and not “serious composition” – but find it very inspiring. Orca is a great source of inspiration – and I recently discovered the visuals-tool “Hydra”, which is a great and accessible tool for visualization.

The last few years, I’ve been using the alias PopGoblin.

I have no idea. Pop-minimal-electro-chill?

I’ve been into music since childhood – playing around with tape-recorders, pianos, etc.

I don’t know why – making music is just something that is an integral part of me. I’m very much into how making music can throw me into flow-states and how pieces of music and sounds from way back, immediately brings back memories and even feelings across time. Music is a great storyteller and a time machine in that way.

I fiddle around with gear. Record stuff. Throw it away. Pick it back up. Procrastinate. Sometimes, all of a sudden, something is taking shape, and I follow where it leads.

Austin Kleon’s series of books, starting with Steal Like an Artist, is great. They contain a lot of great advice!

Promote your latest thing… Go ahead, throw us link