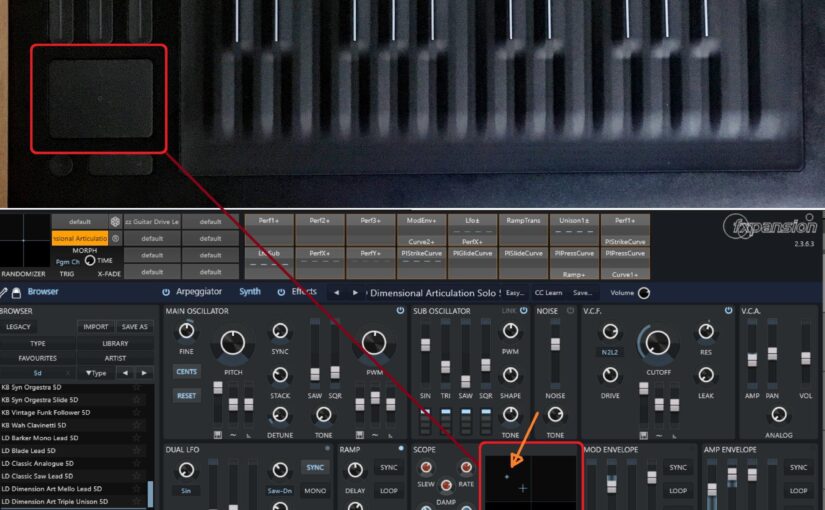 The ROLI Seaboard (midi-controller) has an X/Y-Pad which is very powerful because it connects with the software “Strobe2” that has a so-called “Euclid” processor. It’s way easier to show on a screen, but imagine that when you drag the “target” symbol with your finger on the ROLI, the small dot (orange arrow on picture) follows the target. You can program HOW the small dot should follow the target with different parameters like slew, damp and rate in order to create some pretty original soundscapes. So far I have only used it for film scoring.

This is probably not very original, but just like clichés exist because they are usually true, the PUSH 2 (from Ableton LIVE) works very well for both music production and live performance. What would I change? The fact that Ableton LIVE does not include quartertones as a standard.

My setup is quite simple, actually. Even when I play with my orchestra, I can carry everything myself. My laptop, soundcard (Behringer UMC404HD), microphone (sE2200A||C), and headphones (Sennheiser HD 280 Pro) usually do the trick. A small midi-controller is useful too (AKAI MPK Mini). I once brought this with me to Beijing to visit my friend and we ended up inviting a vocalist from Tinder to jam with us.

I would love to have the VsT-plugin “Manipulator” by Infected Mushroom as hardware. Manipulator is always in my effect rack when I perform live on my santoor.

Uuh.. Speaking of… A midi-signal santoor would give my music production wings!

Hmm… I really regret buying any “Waves”-VsT plugins. They tried so hard to prevent people from cracking their software that it ended up being a headache to use legally. I decided to boycut them some years ago.

Well… If software is gear I think “Nexus” from “REFX” inspired me the most. It is a so-called ROM synthesizer. The sounds are so delicate (yet expensive) and the software is very intuitive. I even heard that they programmed the sounds in order for you to combine them.

I started in “Music Maker” for Playstation (1998), then I changed to FL Studio (2003) and eventually Ableton LIVE in 2013. I definitely would’ve skipped FL Studio and gone directly to Ableton LIVE.

Hehe… That would be my cheap-ass in-ear monitor system that I bought for my orchestra musicians so that I can talk to them during a live show and they can listen to their own performance on a backing track. The sound is absolutely awful, but they’ve accepted it so far.

That would definitely be the world of Persian tonal systems through my santoor. They have 7 tonal systems in Iran. We only have one in the western hemisphere. Working with electronic music (and thereby frequencies) has made it easier for me to understand these systems.

No one in my family plays an instrument. The interest was kind of there from the beginning. I started borrowing cd’s at the library at the age of 10.

Music – and everything that surrounds music – is the reason I am alive.

With a fat polyrhythmic beat!

None of my tracks are ever finished. I always make new mixes and arrangements for live performance, hehe.

Finish your shit and get it out there – even though it is not “perfect”. It will only make you thirsty for more when you get your first “real” feedback.

There is a bunch of songs being released soon, but meanwhile check out “Losing My Impatience”:
https://song.link/dk/i/1488153140