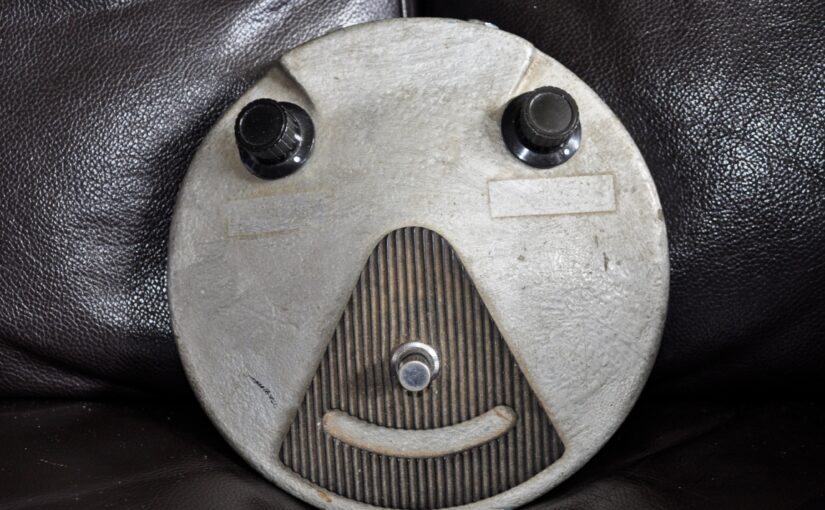 The volume knob, as it makes things LOUDER!!!

My old Arbiter fuzz face from 1966/67. That pedal sounds incredible, but it’s a little bit temperamental when it gets too warm, the work around is to put it in the freezer for 20 minutes to cool the old NKT275 transistors back down and it roars like a lion after that.

I actually prefer to be away from any kind of music making when on holiday, I see it as time to reset and recharge my batteries and also allow for a bit of mental clarity.

[Editor: That is also a refreshing way to think]

I wish there was a hardware version of Valhalla Shimmer in a pedal format, as it sounds beyond huge!!!! I’d love a Fuzz style VST that sounds close to a genuine old Fuzz Face, sadly I can’t imagine anything filling those boots.

[Editor: I love ValhallaDSP plugins too. I find that I use the Particle Reverb algorithm on the ZOOM MS70cdr in the same way as Shimmer. Note: They don’t sound the same, just that I use them for similar musical purposes. There is also a shimmer reverb in the zoom]

If  I’m honest I’d say the Elektron Digitakt, not because it was a bad piece of gear, I just couldn’t get my head round it, despite trying, I think my simple brain likes simpler UI or more linear workflow, win some, lose some… ha ha.

I think having access to a DAW at home has probably been the most inspirational piece of gear. You can have all the ideas in the world, but if you’ve no way to capture them, they are soon lost or sadly forgotten….

Knowing what I know now, it would probably be a DAW, midi keyboard and headphones/monitors and then get creating.

As previously mentioned, I’d say it was my old fully loaded NKT275 Arbiter fuzz face, when conditions are good, it makes the guitar sing like a violin, when the conditions are wrong, its spluttery farts-ville… ha ha.

9. Most surprising tip/trick/technique that you’ve discovered about a bit of gear?

For me  the penny dropped when I discovered  automation in Cubase, total game changer (might not sound too ‘out there’ but I’m a simple guitarist ha ha). It massively helped me to control the dynamics of my tracks and also is a great tool for destroying sound when gradually applied to distortion and bit crusher VST’s too.

My Grandfather taught me to play bagpipes when I was 13, from there I progressed to electric guitar and synths. I soon realised what I had learned on the bagpipes could be applied to other instruments and also, having to play as part of a marching band developed a strong sense of timing in my playing, as my grounding was in odd time signatures vs. 4/4 of most rock/dance music.

Both the pure enjoyment of hearing the fruits of my labour and the challenge to keep coming up with something new. I have some close friends who are a sound board for me and it’s always good to get their input too.

It’s all very mood dependent, often I’ll start a track with drums/beats just to set a temp then delete them and leave only the instrumental. Sometimes it will be a bit more abstract where I may use some pre-recorded sounds that I slowed down to form more of a soundscape.

For me, the whole premise of writing a track is to tell a story without using words, like every story it should have a beginning, a middle and an end. Often when writing a track it doesn’t always come together in such a linear fashion, you may write a riff or chord structure that,whilst sounding fantastic, might not be appropriate for opening the track with etc (handy tip,record it anyways and save for the future).

The part I find most cathartic is the arrangement process after I have recorded everything into the DAW. By applying the ‘like a story’ method, this is where you can really start to shape your track and ‘trim the fat’ in a sense, I see little value in machine gunning the track with some wild guitar solo if it doesn’t require it or some equally self indulgent “look at me” type of playing, its all about balance.

I tend to do a lot of my work late at night, as I feel that’s when I am most creative and because of this, I always will sleep on a track and revisit with a fresh pair of ears a day or so later, this allows me to be more critical with what stays, what goes and what maybe just needs tweaked to sit better in a mix.

I’ll end this question with a quote that from Takaakira Goto —  ‘Music is communicating the incommunicable’.

My good mate David, from the band Slomatics, advised me to ‘make music for you first’. I took this to heart and have done so since then, if people like what I do, then that’s an added bonus. But as an artist, getting ideas out of your head and developed into actual musical pieces is incredibly rewarding.