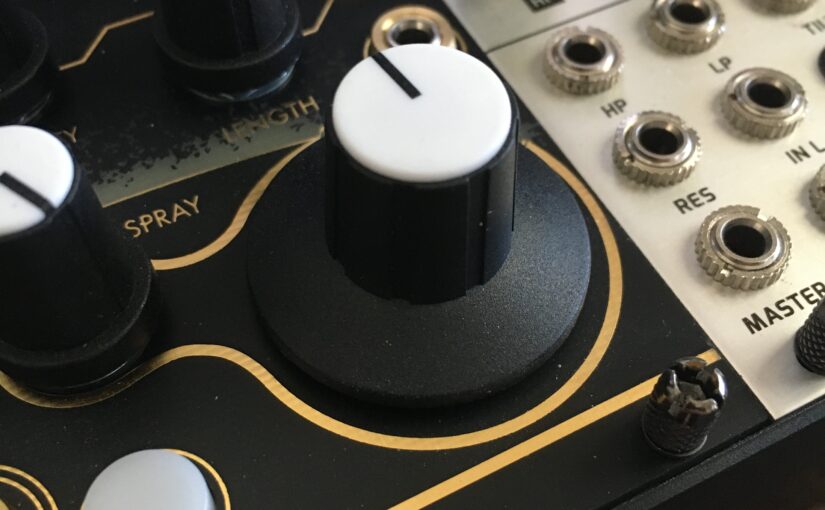 Currently its the Scan knob on the Instruo Arbhar. That giant skirt is so classic, and as a graphic designer the entire aesthetic approach of Instruo really appeals to me.

The ER-301 Sound Computer is very close to perfect for my needs. It does so much and really lets me bring my ideas to fruition. I wish it had more CPU power and a nicer reverb. Maybe more outputs too, but I’m just being greedy.

Occasionally the iPad. There are so many great granular synthesis apps like Borderlands and Quanta. I also put together a small portable modular centered around the ER-301, but I haven’t taken it out of the house yet.

I don’t use much software, but I wish I could have hardware versions of some of those amazing sample instruments like Una Corda (NI) and Blisko (Felt Instruments).

I’ll always regret selling my MemoryMoog. I bought it for $150! It was the mid 2000’s and someone found it in the attic of a house they had just purchased. They couldn’t get any sound out of it so they brought it to my friend’s music shop. He called me and I waltzed in and bought it without even turning it on. When I got it home I discovered that all of the level knobs in the mixer section were at zero, so I turned them up and it sounded glorious! I sold it years later for a hefty profit in order to fund a move out of state, but I’ll always miss it.
[Editor: Damn!]

Getting into modular really got me back into making/recording music after taking a break for many years. I love being able to build out multi-layered complex musical ideas all within one system. Working with grooveboxes was sort of close, but I always seemed to hit a wall of limitations.

Maybe a serious sampler/sequencer. In my early electronic music days I worked with an Akai S20 and Acid Pro on my PC, but I probably could have progressed much faster with an MPC or one of those old Roland boxes.

If something’s too annoying I usually just sell it, but I guess I’ll say tape machines. Maintenance is just part of the deal when you own one. I’ve learned how to service them, but when one stops working during a session its a real buzzkill.

I started playing bass at 16 and simultaneously learned how to record on a 4 track (Tascam 424) with my friends. I eventually got a Moog MG-1 and have been hooked on synths ever since.

The desire to find new sounds, learning a new piece of gear or technique, the need to create.

Usually I start with a sound/texture that’s inspiring and build on it. I also do a lot of improvising, then edit it down to the interesting parts.

“If you’re not making a mistake, it’s a mistake.” – Miles Davis

[Editor: Also I gotta mention that Scott makes the wonderful playable cassette-tape-machine-manipulator Onde Magnetique. Definetly worth checking out, as well as his instagram]