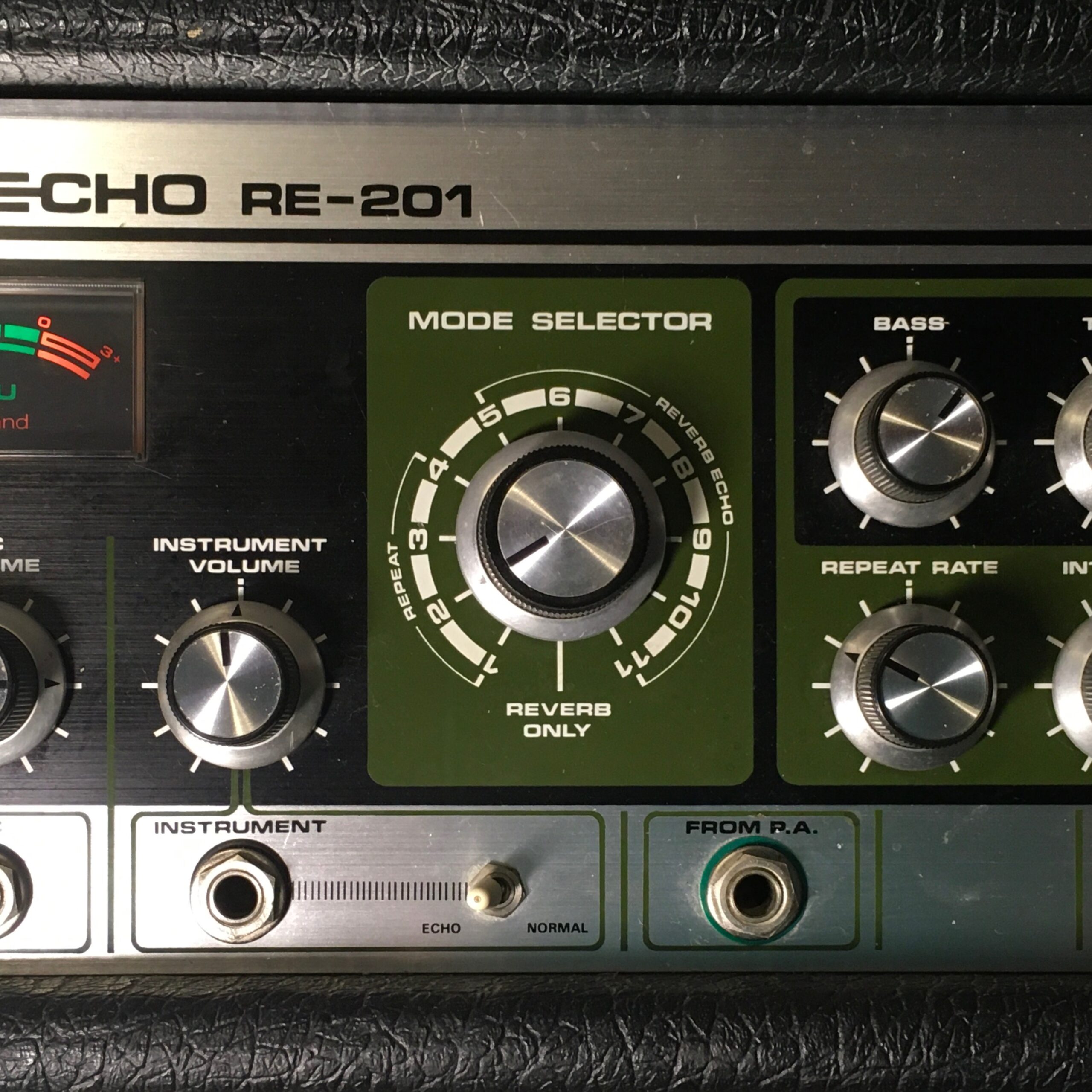 I knew this one right away, it’s the “mode selector” knob on the RE-201 Space Echo. It’s big, substantial, and gives a satisfying click when you turn it. It also happens to be super cool looking.

I think this is going to be the Stillson Hammer MKII by Industrial Music Electronics. It’s like a little CV/Gate 4 track machine. I enjoy keeping my euro sequencing “in the case”, and I love analog style sequencers. I dig that each track can have a different clock division, and you can quickly get polyrhythms going. It’s got a built in quantizer, so, you can set scales. Since it’s digital, you can save and recall all your settings. I really clicked with this module, and now I’ve got two of them. Honestly, I may get a third, but let’s see if they make a MKIII:) I can’t think of anything I would change here.

So, the 1010 Black Box is my go-to for a portable sound station. It’s extremely compact. I’ve got samples of my favorite synths and drum machines loaded in it and it runs on USB power. It’s a proper sampler, so you can record directly into it. It’s also built like a little tank. Just, the perfect micro studio IMO.

I really enjoy using Spacecraft by Delta-V on the iPad. I’m not sure how a hardware version could improve upon it. It feels perfectly suited for iOS with its touch interface, but I still think I would buy it in hardware form. As for a software version of hardware… That’s a tough one. There’s so much out there already, and I’m unaware of what software emulations are on the market. I’d say……the Radikal Technologies Spectralis, only because I really want to try one out and can’t afford one right now:) That sequence looks like so much fun.

Oh for sure, a few.. but I always think about my ATARI 1040st with Cubase. My dad bought it for me in like 1998 on consignment, and at that time, all I had was a half broken Teac reel to reel and an Akai AX60. I used it for years, but at some point, ended up loaning it to someone I thought was cool, because they had a record deal and worked with some industrial band (I was young and dumb). Anyways, I never saw it again. It got traded for studio time or something.

For the past few years it’s been my modular. For me, it’s just a great starting point. Starting from nothing and just getting a little loop going usually ends up turning into a full-on recording session. Other synths start coming into play, and an arrangement begins to form. I really like this workflow, I often feel like, if I had come into the studio 5 minutes earlier, or 5 minutes later, that initial patch may have been something else, and this recording wouldn’t exist. Be it for better or worse 🙂

Ok, so saying my modular is cheating, right:)? For me, I think it would have to be a groovebox of some sort, just because I really like mixing and blending sounds, and forming little compositions. I would need something that would let me do that, right out of the gate.  It’s kind of a toss up between my loaded E-MU PX7, and my MC-909. It really should be the PX7, hands down, but there’s no sampling, and I imagine I’d start wanting to get my own sounds in there. I don’t know man, this is one of those “desert island” synth questions that feels impossible to answer, lol. I’d want my modular, pedal board, GR-1, and Novation PEAK too! I’m just gonna say the E-MU PX-7 and put an end to this madness.

Ohh, I know the answer to this right away. That’s my Sequential Circuits TOM. It’s really aesthetically beautiful, I love the sounds, and its model #420! What’s not to like? Well, the drum trigger pads may or may not respond one second to the next, same is true for a every button on the panel. What menu setting will you get when you press the function select buttons?? Nobody knows, it will just scroll through and choose one at random! But yeah, I can’t get rid of it, I still love you TOM.

I feel like a dummy for this because it should’ve been so obvious. I didn’t know that I could sync the sequencer on my JX-3P with an analog clock. My friend VoidModular had to point that out to me. I mean, it says “SEQ TRIGGER IN” right on the panel. Facepalm.

Somebody labeled me as “ambient vaporwave” in an interview I did recently, and I think that works, although I don’t fit in either genre separately. I’m not sure, but downtempo seems to encompass most of what I do. Most of my music is driven by sci-fi imagery, and imaginary landscapes, is there a genre for that?

My Grandmother got me a Casio SK-5 when I was 6 or 7, and I was obsessed with it. A couple years later my parents got me that red Yamaha keytar, the SHS-10. I was pretty obsessed with those for a while, just kinda banging on them and making noise. I thought synthesizers were cool because you saw them on MTV being used by RUN DMC, Depeche Mode, KLF, Beastie Boys, Nine Inch Nails, etc. I was a kid, and I liked that all this music didn’t sound like things I’d heard before. When I was a little older and started listening to Aphex, Massive Attack, Tricky, DJ shadow, Thievery Corporation, Boards of Canada, Plaid, Mogwai, etc. I knew, that I wanted to learn to do that… I wanted to make THOSE sounds…I’d say when I got that AX60 and reel to reel from a pawn shop at around age 17, that is when I truly started the musical journey. Shortly after that I got that 1040ST and learned midi and laying things out on a piano roll. That thing was already 15 years out of date by then, lol.

I’ve been doing it longer in my life than I haven’t. I start to feel a bit lost if I go too long without doing something musical. It feels like it’s something I need to do at this point. It keeps me happy, and sane, and connected.

Lately it starts at my modular case, the little one I built for live shows. I’ll get something looping there, then add a bassline from some other synth, maybe the Sub37, or MS10, then some chords from another poly, like the vsynth or JX3P… Things usually start resembling something like a “song” or at least a start, at that point.

This one’s tough, lol. If I start to feel like something is nearing completion, I just try to be aware of what I’m doing, so I don’t overwork things. If I start to feel like I’m overworking something, I’ll put it away and come back to it later. I can get so caught up sometime in editing details, like, I stop looking at the big picture, and how things sound as a whole. I’m making an effort to not do that so much lately.