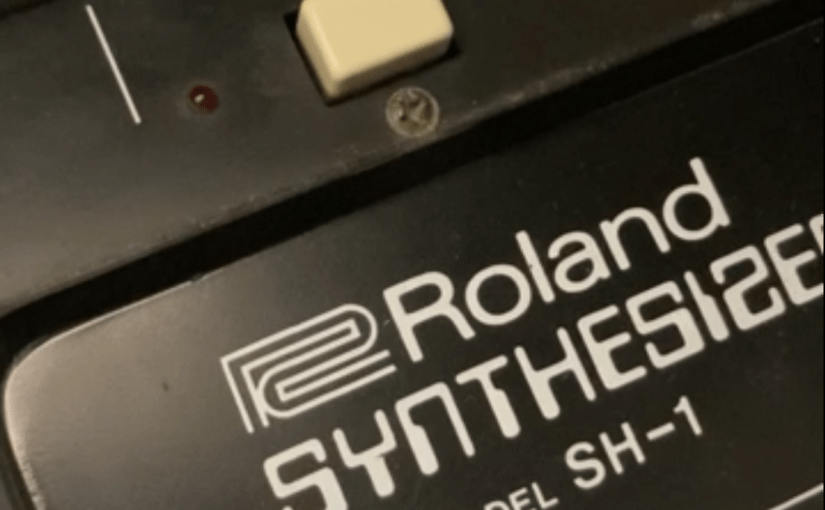 The power switch on the Roland SH-1. It’s an old synth, and the button has a distinct mechanical quality to it. The way it feels, the way it sounds, and the way the power LED lights up immediately – it just feels like getting it on! The SH-1 does that really swell PWM (pulse width modulation) that I enjoy immensely, and simple as it is, it invokes an atmosphere of a simpler time, with a lot of nostalgia to it.

My Roland Juno-106 is close to perfect for it’s purpose. Countless 80’s and 80’s emulating tracks have been born using it, and it’s built in a way that grants plenty of sweetspots, and not so many dead ends. Some people prefer non-DCOs, and have plenty to say about the 106 being a budget synth, but mine’s fresh back from service, and it makes me happy.

I sometimes wish it had another oscillator with an easy option for detuning, to get a wider sound from it, but there is a lot to be said about limitations to foster creativity.

… Also, I am not particularly fond of the way the resonance sounds when it’s cranked way up. It’s glassy instead of being juicy – and rarely that’s a good thing. On the other hand, I don’t have any other things that sounds like that, so it’s probably best to leave that unchanged.

Laptop, almost certainly. I am no where near anything dawless, and don’t have anything that I could arrange anything with, besides a computer. If I weren’t writing, but merely playing around, I would bring my Roland TB-03, or Yamaha Reface CS – built-in speakers and battery operated, they are 1. 2. go!

4) What software do you wish was hardware and vice versa?

Software -> Hardware: I think Native Instruments Absynth. I have had that since forever, and still use it heavily. Also, I would like to see the physical shape/color/layout of such a thing!

Hardware -> Software: My brain. Although it feels soft at times, I consider it hardware. It certainly interfaces like 40+ years old hardware (poorly that is), it is sometimes difficult to control when hot or cold, and it’s almost never in tune. Also – patch memory is severely limited. If I could instantly recall patches, production tricks, channel-settings and export/bounce the tunes and sounds directly, like with a lot of software, then… Well, it might take out the fun at times.

To be serious: My modular setup would be nice as software – mainly for patch recall.

I never sold anything ever, so that doesn’t apply. And therefore I never regret selling anything either!

I once bought a portable recorder, thinking I could get a lot of good sample material that way. I only did once, but it never made it into a track I finished. I have fond memories of getting up early to catch a few big trucks on big roads going by, though… So, no regrets I guess…

I bought an Ensoniq SQ-R module, because it features Transwave synthesis. Never used that, but it had a nice belltree sound that I used once or twice. It’s probably the thing I’ve bought that comes the most close to being a regret.

My trusty iPod classic 80 GB. That’s a lot of late 90’s goatrance… Listening to that is what inspired me most over the years. It had a growing line of dead pixels over the course of a year, and when the line was fully dead, the pixels started working again from the beginning of the line! A year after, the whole display was good again. That is probably my strangest experience with any electronic gadget ever.

If I should channel this to some sort of an inspirational tale, it would something like how the small and weak Hobbits defeated the mighty Sauron – it might appear to be failing, and an unlikely source of victory, but give it some time, and it will surprise you.

That is also why I have never sold anything. You never know.

A decent room for working in. Go all crazy thinking about getting the ‘right’ monitors, nice preamps, the perfect cables (ugh!)… But if your room is horrible, none of that matters. I have sunk a fair bit of time into acoustic treatment, and it has made a world of difference.

Again, my computer. Ill timed software updates, one too few CPU cycles in stacked projects, failing disks… The woes are many, but I wouldn’t have written a bar of music without it.

About 20 years after I got my Roland JV-2080, I realized it was capable of faux PWM. If I set a regular sawtooth wave on one osc, and an inverted sawtooth on the other, and modulate pitch slowly and independently, then it happens. I wish I had known that 20 years earlier, but that would probably mean I wouldn’t have bought my SH-1 (with the fab power button) – so it’s all good!

I have mainly been producing under the moniker “Amygdala”. Goa and psychedelic trance in the old (old!) sense of the word.

Lately, I have been making some drops in the already over saturated ocean of synthwave music. I enjoy that very much, and as a child of the 80s, it takes me back to a simpler time – worries forgotten. The moniker for this activity is “Prior Use”.

Many kinds of trance music: Goa, psychedelic, melodic, uplifiting, minimal, tech-, progressive.
Besides that, a bit of synthwave, and the odd “psy-bient” piece.

I am from Denmark – just a tad north of Copenhagen, but most of my music has been produced in Århus. You can really tell what a big difference those 170 km makes!

My parents and brother. Music was omnipresent at home when I grew up. My parents encouraged me to take up playing violin when I was 6, and I have had some great experiences with that. When music production became reasonably available to the regular consumer with computer interest, I was hooooked! At first, it was just another thing I could do with the computer, but rather quickly it was pretty much all I ever did with it.

The two biggest drivers are probably the “flows” and “highs”.

Flow when I can be completely engrossed in production, enjoying the situation, and getting something done which I like and feel as an accomplishment. Time flying as I ignore my body’s attempts to drag me to the loo, trough or bed.

Highs when I hit something that (in the moment) is spectacular – a catchy tune, a sweet timbre, or a really dope fill or transition. It can still make me laugh after all these years, and the surge of energy and motivation I get from that is unparalleled.

Sometimes I start with a very simple idea like a tune, a chord progression or a synthesizer patch concept. Then Drums. Then bass. That’s the most usual case, although sometimes I skip directly to the drums. Lately, I have been thinking that it’s not the best way to go, as I am finishing fewer and fewer tracks. I often end up with a pretty decent groove, but lacking the centerpiece idea that makes the track stand out. I polish the rhythmic section and transitions, until there is not space left in the spectrum (frequency and/or mental) for anything else.

So, from now on, I am trying to start off a new track with an idea, and then build drums and bass around that. We’ll see how that goes.

When a track has all the arrangement elements (intro, good stuff, breakdown, great stuff, climax, outro – or some other configuration), I bounce it and listen away from the studio. I make a lot of notes I want to change, enhance, remove, whatever. When that list feels complete, I do those changes. Hopefully I am happy with the result, because at that point I am usually fed up with the piece. I am not one for endlessly tweaking everything, and I have a tendency to detail focus early – which means I “decide” that this bit is perfect, and then unconsciously prohibit myself from editing it (too much ðŸ™ˆ).

I know there is some degree of contradiction in the above, but I’ll just hide behind “you can’t argue art”.

I bought a CD from Eat Static sideproject Dendron (Merv Pepler). I think he burned the disc himself and mailed it. Included in the package was a makeshift invoice with the words “always experiment” on it. I think that’s pretty good advice. It’s hard, because as time grows scarce I tend to stick to the beaten path, but even though it feels like it’s safer and more productive that way, I get less enjoyment from it.

As mentioned above, I dabble in synthwave. Swing by https://soundcloud.com/prioruse and tell you friends.

[Editor: if you want to check out Andreas psy-trance stuff it’s here: https://ektoplazm.com/profiles/amygdala]