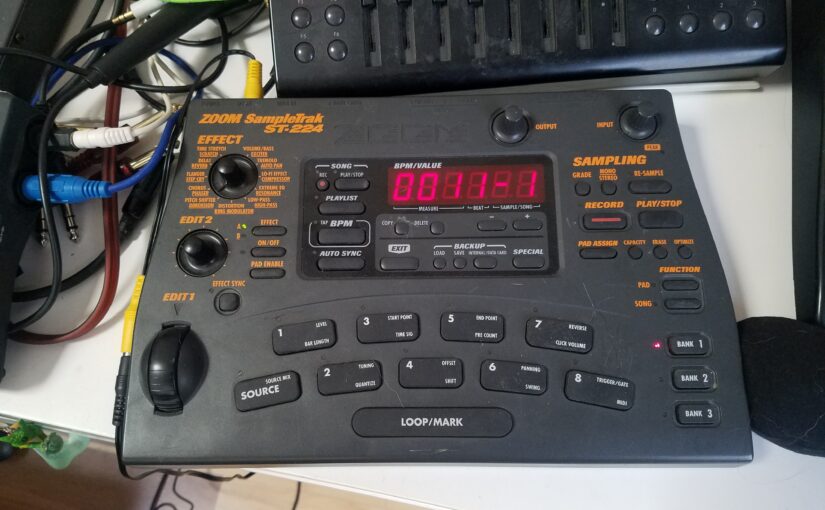 First of all, I LOVE this first question. I think I’d have to go with the “Signal Channel” knob on my PAE Lock-in Amplifier. It’s huge, it’s clicky, it’s satisfying….and most of all it’s a gain knob on a distortion. If you’re unaware: Lock-in amps are basically an overdriven filter used in Engineering labs for finding voltage inconsistencies in the 1960’s on, and are a WONDERFUL choice, if you’re looking for an over-powered distortion with a ton of sweet-spots (somewhat reminiscent of a Sherman Filterbank). If you’re interested in learning more, Hainbach covers the musical use of these in much more detail on his Youtube channel here.

I feel I have a somewhat surprising answer for this question: The Yamaha RY30 drum machine. A boring-looking, cheesy, 90s sample-based ROM synth. It’s truly a simple box: you layer two sounds, pitch them, filter them, put them through a pitch EG, and then play them on velocity-sensitive pads while pitching them with a wheel. I think I feel so connected to the RY30 because the workflow is so streamlined, yet it gives me such unique percussion that I would’ve never made in a DAW… it just feels FUN ! These limitations are inspiring, but if I could change anything about it, I’d love to load my own samples in and would appreciate a reverb no matter how crappy. With this in mind, I’m trying to learn my Korg M3R in combination with a Wavrex Samplecard to make that dream a reality. Both the M3R and the RY30 are layer-based ROM synths a-la Roland R8 or AI / LA synthesis found in the Roland D50 and Korg M1. So in theory, I should be able to surpass RY30-esque sounds with the more robust design of the Korg M-series (as long as I can wrap my head around it).

I often bring my Laptop, Zoom H6 field recorder, and Zoom ST-224 sampler (known online as the poor-musician’s SP-1200) around with me in my bag. The ST-224 is such a surprisingly inspiring sampler, mostly due to its extremely musical array of effects (and gorgeous sample rate), so it’s perfect for quick explorations to record out of the main outs and revisit later. If I’ll be gone a while, though, it’s hard for me to leave my Intellijel Rainmaker at home ! It’s by far one of my favorite pieces of kit as it’s basically a strange-sounding infinite loop-maker machine. I have countless recordings that I’ve cut up into sample / loop packs and use extremely often… it’s truly a gold-mine for new sounds and inspiring ideas if you’re willing to tame it.

As far as software to hardware I’ve wanted an Ableton Operator clone for YEARS, as well as Ableton’s Drum Buss and the Max Convolver (but really any hardware convolution reverb would be wonderful to have). If it wasn’t clear by now, I’m a huge Ableton lover haha ! For hardware to software I’d love to have a Rainmaker VST, as well as some Lab Equipment-inspired effects to get that raw electric sound.
[Editor: Hainbach is working on a VST Lab-Equipment Plugin with SonicLab]

This is actually very relevant to me, as recently as last month I bought a Lexicon Vortex for the 2nd time after missing it so dearly !!! But as of now I’d say that I miss my combo of the Eurorack modules: Ornament & Crime, Clouds, and Plonk. The three of them could cover so much range of mutating and captivating sound design. I’m still going through recordings I have of them from years ago and repurposing them in Ableton projects.

Over the course of the last year I’ve been growing into more of a hybrid music setup where I use my hardware as strictly sound creation tools and Ableton for sequencing and chopping up samples / loops from them. It took me years to find that I simply don’t write fully-realized songs when I use my hardware setup alone. I’ve owned the MPC 1000, OP-1, Octatrack, Squarp Pyramid, and TR8s, over the years, but none of their workflows really clicked with me. It could be that I don’t have enough sound sources or that I don’t have a big enough mixer or that my gear just isn’t hands-on enough…. but I believe that it’s more that my production style revolves around sound exploration first and song realization as a reaction to it. With my current setup I feel that almost every piece of gear is catered to my workflow of improvisation and recording to create a pool of content to pull from. The pieces I use the most, though, are: The Intellijel Rainmaker, Zoom ST-224, Lexicon Vortex, Yamaha RY30, Ucreate, and my Lock-in Amp.

[Editor: I gotta say, it took me years to figure out a similar workflow to what Zack describes above. Creation first. Editing afterwards]

Although I’ve mostly moved away from Eurorack I’d definitely start with the Rainmaker and grow into a modest 84HP setup from there. Without the constant yearning to make fully-fledged songs like in my past, I feel that I’d get so many more ideas down than I did originally.

Definitely the Korg M3R as mentioned earlier. The workflow is still completely over my head at the moment so I usually edit presets. Luckily I recently got the Korg RE-1 controller for it and hope to put some time into learning the combo more fully, hopefully to turn it into the most capable synth that I own. A close second would be the Zoom MS100BT multi-effect pedal that you can make virtual pedalboards with BUT there are no expression or MIDI inputs, so it’s very hard to integrate into any setup, except very static ones or perhaps mixing.

A simple trick that BLEW me away recently was using internal feedback with the Lexicon Vortex. The otherworldly aggressive sounds you get from patching it into itself gives it a completely different character, than when you use it to process outside audio. This technique can also be implemented so easily into setups with matrix mixers, mixer sends, filters, and effects to create an endless inspirational output to explore.

Collaboration and the excitement of new projects.

Messing around in Ableton, cutting up recordings, or recording voice memos with riff ideas.

When it feels right and it makes me happy.

Sure! It’s a MESS because I’m always moving things around, but it’s MY mess. (:

“Many ideas grow better when transplanted into another mind, than the one where they sprang up.” COLLABORATE !

Promote your latest thing… Go ahead, throw us a link

Right now, I’m part of a team called Five Side Studios and we’re creating a computer game called Memorial ! Playable demo should be out soon, but follow our twitter in the meantime ! http://fivesidestudios.com/memorial